My Familia and Other Pigs by Georgia Manuela Delgado, highly commended 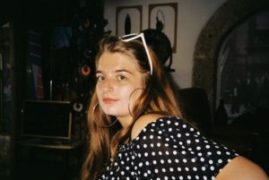 Georgia Manuela Delgado is a writer currently based in Sydney with a Portuguese mother. She recently graduated with a Bachelor of Arts from The University of Sydney.

My Familia and Other Pigs

When I was a child, I could see ghosts. I could hear them too. “What’s your name? What did you die of?” I asked a ghost one day. A nun, in her habit. “A broken heart, child.” This nun I picked up in the convent in the next village. She would get in the car with us and come home with us sometimes on Sundays after church. She would stay with me until I fell asleep. Then she would go back to the convent, that’s always where I would find her again. There were lots of ghosts there, from the convent cemeteria. One ghost died in a fire, she would bake cakes in the convent bakery. She was particularly good at baking Pastel de Nata. She was always offering me cakes, but I could never see them. Her hands were terribly burnt. The other nuns would kiss her hands and sing her ‘O Fatima’. All the ghosts in the convent looked after each other, spoke to each other with kindness. They were so gentle they almost whispered, which is strange for the dead because they’re normally screaming. Once I saw two nuns take off their habits and braid each others hair. Women, alive or dead, will practice the economy of reciprocal care. No institution, not even the church, filled with love and the holy spirit, could instill that in men. But these women, my fantasmas, learnt in life that to survive Salazar, the war, the rape, the suffering, the heat, the beatings, the fires in the mountains, the starving of everyday life in Portugal, the only way to survive all this is other women, and love. They use suffering and turn it into love. Like how women lie in their own blood once a month and still make children from that.

As to be expected, all of the women in my family believed I saw ghosts. These women live in the realm of the dead, death never ends when you live in a dictatorship. That doesn’t mean that they gave me any special attention. Women from our village have to grow up and be strong.  When you work in the hot sun and open your pores to God, she fills them in with cement and hardens you. There’s no time for sentimentality. Even romantic love starts out soft and poetic and quickly becomes a cruel and brutal torment. Love is always unforgiving, especially for women. My mãe always felt unloved and therefore unloved everyone else. I never could understand why my mãe was not like the nuns. She never sang, she never oiled her hair, she never sat in the sun and closed her eyes and daydreamed. She had children to take care of. That included her husband. My mãe had one of her teeth knocked out with a rock in our garden because it turned grey. My great aunt knocked it out for her on a long warm Portuguese night. I remember that night because she put me in my room and closed the door. She didn’t want me to see. I opened the door and peeked anyway, so she hit me really hard with the rock across the face. I was nine.

By the time I was sixteen, I had stopped seeing ghosts. My mãe worked it out of me. I could still see all things I was meant to see, but, more faintly. It lingered because my grandmother would always let me into her rituals. She was a bruxa, a witch. When she knew my grandfather was lying, we would go to the butcher together and buy cow tongue. She would cut it up and ask me to rub salt and olive into it. Then we should cook it into his arroz com polvo and he would eat it. Then my grandmother would ask him his secrets, and he would tell them. This allowed me to keep my connection, to see the things inbetween.

My grandmother would send me to Lisboa once a week, to buy fabrics for her. She sometimes made me clothes, but she made them more for other people. Even now, sometimes people in my village will ask me to come into their homes and admire their curtains or blankets because my grandmother made it. I would wait for the bus in a petticoat my grandmother made me. The bus came when it felt like it, but not everyone buys a ticket. This doesn’t happen all over Portugal, but it does in our village. There’s less and less work and more and more trouble. Nobody speaks to me on the bus, even though I sit at the front near all the old people who love to talk, because I’m scared of the older boys at the back. Today people are talking about the fires in the next village. Someone died yesterday, a little girl, trying to save a picture of the dictator Salazar. The whole family escaped but she ran back in to get the photograph, and she got trapped like a moth in a lampshade. “It’s true, my friend lives in that village. That girl is dead” an old man my grandmother knows says. I think about whether that’s true, or if its propaganda. She definitely died, but not for a picture. The bus is moving but people are standing up, reading over the newspaper. “Oh she was bonita” I hear a woman saying. I can’t see the newspaper so I have to imagine the little girl. I know she already has her ears pierced no matter how old she is. I think of my grandmother who has never had her picture taken and never will. There will be no picture of her in the paper, and not one on her gravestone either. I feel something but I don’t know how to describe that feeling yet. Years later I recall that feeling as bitterness.

On the bus, we pass the best village on the way to Lisboa. Vila Franca Xira. Some neo-realist philosophers live here. Although I have no idea what that means, I know it’s important because an older girl at school told me and her sister studies philosophy in Lisboa. Vila Franca Xira has the biggest and most beautiful bull ring I have ever seen. The entire outside is painted gold. Sometimes people from Lisboa even come here to see bullfights. People in Vila Franca Xira drink coffee at the cafes, but in my village they only drink beer or poncha. I always want to get off the bus and have coffee too, but my mãe would have some ominous punishment awaiting me if I was late. We are stuck in traffic and I’m not sure why, it’s a Tuesday morning. There is no mass on. Sometimes I can feel when something bad is going to happen, although not all the time, just when God decides. It’s because I can see the whispers, because I can see all the things in between. I can see from the bus the Guarda Nacional Republicana soldiers and I know something is wrong. The Guarda Nacional Republicana make me nervous because when they come to our village looking for traitors, they stand in the middle of the sidewalk and make women rub against them to get past. The first time they did that to me I was eleven.

The bus stops at the Guarda wearing berets, even though it’s really hot. Behind them there’s blood splattered all over the gold, like the first time I lost my tooth and dribbled some blood onto my mãe’s gold hoop earring. The blood on the ground reminds me of the first time I got my period in the dirt, but I’m less scared than I was when I got my period. The bus keeps going, and people are gossiping. I don’t remember what they said about it then, I was too anxious to pay attention. By the time I returned from Lisboa that day, the reason had hit my village. A bullfighter had slayed another bullfighter. Machismo merda. The mortician said he couldn’t ply the teeth out of their knuckles with just pliers; they had to pour oil all over their hands first and massage the teeth out. Only years and years later did it come out that they were lovers.

My pai was fighting the fires in Vila Franca Xira that day I saw the blood. The fires were so bad that the firefighters from our village went to help. My pai fought one of the worst fires Vila Franca Xira ever saw at a piggery. The fire surrounded the men and they had no choice but to jump into the piggery waste lagoon and go under as the fire spread over the top of the water. The pigs fried, and the smell was so close to human flesh that the firemen believed they were smelling dead bodies. The men left the piggery convinced they had been underwater with dead children. Most of the men were discharged with what we now would call Post Traumatic Stress Disorder, but back then was called going luco. In the middle of the night, my pai would wake up to the sound of children screaming, and then he would go into our garden and look for them naked. All the old women on our street talked about my pai going luco. On my way home from school, they would say “Yeah, there she is. Such a beautiful young nina. What will happen to her now that her pai has gone and decided to be fucking luco? Eh?” My grandmother thought it was funny and would laugh at him. She would say “What are they saying when they are screaming? What words do you hear?” She said my pai did not listen properly and they will not go away until he hears them. My mãe never laughed. “You are the man of this house, and ghosts are screaming in your ears at night? Fantasmas that don’t exist? They were porcos. Always porcos.” Is this the spiritual nobility of the peasantry? My pai started drinking poncha every night, to drown the noise. But ghosts don’t ever drown, they learn to swim. The children screamed less and less, and eventually my pai went to work as a labourer. He was still known as luco but someone who had pulled it together for his family. Then one hot day he died in an accident at work, he was completely crushed by a machine. It was so fast that they say he would not have had time to suffer. The night he died was the first night my mãe slept alone since she was nineteen. They were married at seventeen but he spent two years in Angola fighting for the colony.

Years later I fell asleep on the couch in my parents home during a tedious visit filled with remembering emotions suppressed in order to survive my childhood. I never slept on the couch, it was something my father started doing when my mãe kicked him out of their bed. I woke up hearing children screaming. I couldn’t hear what they were saying.