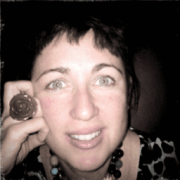 Natalie Rose Dyer is currently completing her PhD in Creative Writing at Melbourne University with an Australian Postgraduate Award. She received a BA with first class Honours in Cinema (2006) and an MCA (2010) from The University of Melbourne. She is currently working on her first book of poetry. The title poem ‘The Butcher’s Daughter’ appeared in 3/2014 Meanjin Literary Journal. Her work is also published in 2014 University of Canberra Vice Chancellor’s International Poetry Prize Anthology. Her first solo art exhibition was at Bokeh Gallery in Daylesford (2014). Her blog can be viewed at www.natalierosedyer.com

My bestial presence ever-present,
first noticed at primary school.
The other girls had unhaired legs,
mine outpoured like a simian species.
I wanted to run right out of the playground,
but was stuck there in my body
with awareness of myself half-manned.
Not just on my legs, later I discovered
black-weeded death above my lip,
the barnacled beard of stray hairs came later,
shower of dusty dark wired pubic tendrils
in my armpits, though not as thick as
the German girls witnessed in the change room,
shamed her for not shaving it off
to my friends later. But she was just like me,
covered in latticed thread to her mid-thigh,
hiding the underling, centre of blood
unmasked, which we all waited on expectantly.
There was even more hair knitted,
a furry rainbow that arched over my eyes,
fighting for my life against the insults
until I waxed it off, even then –
naked of hair, I hid behind my wintry coat,
an Athenic shield made invisible,
preparing to fight, sharpening, having
torn from myself the bushy blessing
through wanting to fit in, but never quite able
to take it all off, my furry blood
at the hinge of my sex, a creature stirring.