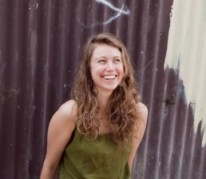 Harriet McInerney is a writer, editor, bookstore worker and tiny cacti grower. She recently completed Honours in Writing Studies at UTS, where she wrote on the blurring/unblurring of the real/unreal. She has been published in Seizure, Voiceworks, and is forthcoming in the UTS Writers’ Anthology, 2015.

When my mother went missing I cleared out the slicky golden muck. It had puddled in her shower, dried up on her sheets. Stuck hard on the stairs. I didn’t know what it was. But it’s sweaty honey stench; I recognise that smell walking into Odessa’s. Somewhere lingering, masked underneath.

Mostly, it all smells of meat in her hallway. Rising up through the building. From the downstairs butcher. Odessa greets me. Towers over me. “Come in. Please. Take a seat with me on the balcony,” she says.

My mother had suggested I go to see Odessa. My mother, had that round-eyed belief in spiritualism. Made my own eyes roll. A healer, she healed me, my mother would repeat. She’d say it so clearly: unimpeded, unstuttered. My mother’s words, sometimes, they’d had a habit of being splashed and smashed apart. I remembered. Her voice in my mind. Smattering about.

Out on the balcony I can’t smell the butcher downstairs any more. Can just see the people walking in, and then out they go with dangling plastic bags. The butcher is one place where no one really says no to a bag. Needing to keep the squelchiness inside.

Odessa is very beautiful. Odessa is considerably obese. Rolling pink cheeks as she leans back into a wicker chair. They say that she has travelled far and wide. Learned the tricks. That she never says no, never says never. But knows when to say when. ‘They say’ is what my mother would say. Way back when.

We talk about the weather for not long. And what I am there for – to be healed. Odessa does not like to hear what needs healing, she stops me from explaining. Instead she asks of my mother, and speaks fondly of past visits. I had not really known they were close.

Odessa’s skin is glowing. Wet. In the heat of the sun. Her balcony is very crowded, covered in big pots, and sprawling shrubs and vines spilling out. Strawberry plants and cacti on the table. Everything is thriving.

There is movement in the house. I had thought we were alone. But a tall man makes his way to the door. He greets us, holds out his hand to me, a little too high. I realise he is blind. He introduces himself as Miles and moves to sit on the balcony. There isn’t really enough room. But room is made and Odessa gets us tea. A quick medley of teaspoons hitting against cups. Miles offers his condolences. He knew my mother too, I discover.

“Such sad news. She was too young, too full of life,” he says.

I learn that my mother had done odd jobs for Odessa, from time to time. I’m not sure why I am surprised, we weren’t the kind of family to tell everything, but it seems a banal thing to keep quiet.

On Odessa’s earlobe is a golden honey-like substance. “Her body weeps. But it does not know what it weeps for,” I remember my mother saying. About this Odessa. In her vague kind of way. Odessa catches me staring and wipes it off.

Miles goes out and Odessa begins business talk, saying that she is not your typical healer. That she has come to healing later in life. The honey is on her ear again and is about to drip down. It distracts us both.

“Sap, just like from a tree.” Odessa’s voice is calm and gentle.

“It comes out of my body. Through a few different places, sometimes in the creases of my palms, or my fingernails, or the piercings on my ears.”

“It started a few years ago now. I’ve gotten used to it. But it took some time. It’s the sap that can heal. Just look at how all these plants are growing! I put the tiniest bit of sap on them while they’re young, and they grow up fast and strong.”

Half-drunk tea cups are still cluttering the table. Odessa picks up a teaspoon. Holds it under her ear. Collects the sap as it drips. Her eyes downcast. The sap is thick and it collects on the spoon slowly. When there is enough Odessa motions me to dip my finger in, and smear it on my forehead. Odessa closes her eyes. Then we both sit there, in silence, and I can hear the door of the butcher’s swinging back and forth, but it now seems far away.

Odessa asks, just as I’m getting up to leave, whether I would be interested in doing some odd jobs for her. Just from time to time. Running errands and the sort. Since my mother cannot anymore. It’s a strange request. Odessa says there aren’t many people she would trust.

When I get home I remember I have friends coming round. I keep my visit to Odessa quiet. Just for now, I think. Until I have it worked out. In my tiny apartment there is barely room for company. My friends, with families and children, live the conventional lives we all used to laugh at. They visit to escape their screaming toddlers. Or, sometimes, because they worry about me being alone. These friends have been all support in the time since my mother disappeared. Now, months later, there is little hope left. Her car had been found parked near the beginning of her favourite bush track, which took you deep into the valley, a walk really too difficult for her aging body. She must have fallen, been hurt, maybe, had knocked herself unconscious. No remains had been found though. Search teams had scoured the area, but unearthed nothing. I don’t know what to think.

I start doing odd jobs for Odessa the next week. Odessa doesn’t have a phone or internet so I go to her flat for any instructions. Even then, it is usually Miles who answers the door, and tells me what she needs. Often it’s collecting groceries or posting mail. It seems Odessa does not often leave the apartment. Or not at all. This goes on for several months. I like taking care of her, and thinking that this is what my mother used to do. When I go to the supermarket I wonder how many others collect things for Odessa. She hardly wants any food. She can’t live off the stuff I buy for her.

After a while Miles has gone. When I ask, Odessa says she thinks he’s gone to work in the country somewhere. She’s not too sure, he left pretty quick. People often come and stay to be healed, she mumbles. But sometimes it just doesn’t work.

One day I ask her if she leaves the flat at all. Odessa says hardly ever. That she worries about people seeing her skin with the sap. She doesn’t like the outdoors anyway, she says. Even though the plants on the balcony are thriving. I want to question her further, take the chance while I have it. This is the first time Odessa has mentioned the sap since our first meeting. I ask if she knows what causes it. My burning question. Odessa doesn’t. Sap in trees comes out when pressure builds up inside. The sap spills out any way it can. Odessa guesses it’s the same for her. Trees use the sugars in their sap for new growth, for flowering and fruiting, and after that there isn’t a lot of need for it.

I start spending more time at Odessa’s house. On the weekends. Odessa works from home when she can, but otherwise she has a job at the butcher’s downstairs. She rents the flat from the same family who own it, and they are always happy to have someone extra. Wearing the tight hairnets and long sleeves, it is manageable for her. She no longer believes in the healing, Odessa says, she doesn’t want to do it anymore because she isn’t sure it works. Doesn’t think it works and also doesn’t want it to.
Odessa is moody. Particularly when questioned on something. She gets lonely in that flat of hers, but refuses to venture any further than the occasional a.m. shift at the butcher.
One day one of the butchers notices the sap. Odessa doesn’t think he knew what it was, but he got scared anyway, told the boss that she was unhygienic. Butchers need to be hyper-vigilant about that. So she stopped working there, and stayed home instead. All the time. Just up there sitting on her veranda. Worrying about money. Thinking about being forced out of the apartment. Then Odessa got obsessed with fire risks. Called in building inspectors to assess the place. And then went around and tried to fix things, installing smoke detectors on the staircases and threw out all the rugs in the apartment. Trying to make sure nothing could force her to leave the building.

Odessa got so hard to handle, and so little in want of company. I stopped visiting her. Slowly. It wasn’t just me distancing myself, some days I would knock on the door and get no answer. I knew she was home. But the door was bolted, balcony empty. I tried to contact Miles to ask him why he left. I hadn’t paid attention at the time, but they’d seemed so close, and he’d left so suddenly. There were no details, no traces to be found.

Downstairs, at the butchers, they asked me about her. Said they always heard moaning from upstairs. Said about the different men and women that had come to stay with her over the years. The one’s who never stayed long. Just long enough for the butchers to get to recognise them, but not long enough for the apprentices who only worked weekends. They were just being friendly, neighbourly, but I left pretty quick with nothing much to say.

It’s a year or two later when I first notice sap, not blood, spilling out of a graze on my knee. I am shocked. I keep an eye on it, but it only stays there a little while, hovering and golden, before it drips down my leg. When the wound heals the sap disappears too. But then a few months later there is sap forming around my fingernails, then falling from my eyes. Thick gluggy tears. I think about calling in on Odessa. Then I never do go. I’m no longer interested in an explanation. The idea of being with her, indoors, it feels stifling.

I am out, having lunch in the sunshine when I realise I feel hungrier for the sun than any food in front of me. I eat because it feels normal, because the others are, not because it makes me full or satisfied. Later I am walking home, taking a short cut through the park, when I notice I want to sink into the grassy earth. My feet pull downwards. I struggle to keep moving.

When I think over these developments they are startling. But I don’t like to think things over so much anymore. I think about my mother trekking down that remote valley. Imagine her dragging apart sprawling undergrowth.

I go out to the scrubby land near the cliffs the next day. The sky is huge. Clear and welcoming. I walk along feeling the rustle through my limbs. Notice myself sinking. And I let myself crust over.