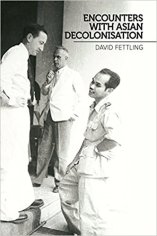 Encounters with Asian Decolonisation compels us to rethink Australia’s place in Asia’s past through the work of individual Australian government officials in Asia after World War Two. In this first book for David Fettling, which is based on a PhD dissertation completed at the Australian National University, he highlights a disjuncture between Australian ‘ideology, ingrained ideas and assumptions on the one hand’ and these officials’ ‘first-hand experience and “learning” on the other’ (232). He thus contests prevailing historical scholarship on Australia-Asia interaction during this period, which emphasises Australian animus towards Asian decolonisation.

The book centres on the work of Richard Kirby, Francis Stuart, Tom Critchley, Keith Officer and John Burton. These men acted on behalf of the Australian government in diverse roles and in different locations released from colonial control at the end of World War Two: current-day Indonesia, Malaysia, China and India. All left a rich government archival record behind them, the basis for Fettling’s account.

After an opening chapter on popular Australian responses to Asia between 1930 and 1949, which provides background for ongoing comparison, the book delves into the activities of the five individuals. In Chapters Two, Three and Five, dealing with Kirby, Critchley and Burton, Fettling depicts ardent advocates of decolonisation in Asia. Kirby, a judge appointed by the Australian Department of External Affairs in 1946 to find the murderers of three Australian war crimes investigators in Tjaringin, Java, acted closely with Indonesian nationalists in this search for justice. Critchley, Kirby’s aide and then External Affairs successor in Indonesia, championed the Indonesian Republic, opposing the Dutch through the UN in 1947 and 1948. Burton, Secretary of the Department of External Affairs over the period from 1947 to 1950, similarly supported Asian nationalism, appearing perhaps most notably at a 1949 New Delhi conference of non-Western countries as the only delegate who identified as ‘European’ (188). These three men, according to Fettling, largely, but not entirely, defied the ‘racialist baggage’ of their era to become agents of change in Asia and Australia (229). In Chapters Four and Six, however, which explore the work Stuart and Officer, Fettling describes reluctant proponents, yet proponents all the same, of Asian decolonisation. Stuart was attached to the Australian Commission in Malaya and took part in what he saw as a hopeless British campaign against Communists on the Malay Peninsula between 1947 and 1950. He advocated a transition from colonial administration to a limited nation-state arrangement in Asia. Officer, who was the Australian Ambassador to China between 1947 and 1949, also supported a restricted form of Asian nationalism that protected the interests of the West. These two men, Fettling contends, indulged in regular stereotyping of Asians, yet simultaneously performed their duties in a way which recognised, in the words of Stuart, ‘how the world had changed’ (230).

The book’s principal strength is its use of biography. By following the deep archival footprints of five people, Fettling is able to compose an authoritative and absorbing historical narrative. The authority of this approach lies in its allowing him to interrogate overarching thought on a personal level and tease out discrepancies with which to contest other scholars’ assumptions about this period. This technique, often referred to as ‘microhistory’, has also been deployed effectively in landmark works such Carlo Ginzburg’s The Cheese and the Worms. Fettling’s biographical sketches are absorbing, too, because they enable the reader to experience events of the time through the hopes, fears, realisations, reservations, satisfactions and frustrations of individuals, rather than through abstract concepts.

Yet, the use of biography is a weakness as well. Indeed, the subjects of Fettling’s inquiry are representative and relatable only to a point. All were male, educated, literate and articulate, coming from middle- and upper-class families, employed in desirable government positions, and all of Anglo-Australian ancestry. As such, the implications of their work and their appeal to a general readership are finite. The men’s activities in Asia often also seem to obscure the central drivers of decolonisation in Asia, Asians, who have been extensively marginalised in Australian histories until recently. This is not only somewhat disconcerting, but it also makes Fettling’s approach seem odd in that most microhistories are intended to revive overlooked groups of the past, or those ‘passed over in silence, discarded or simply ignored’ as Ginzburg calls them: groups of which Fettling’s subjects were not members.

On the whole, nevertheless, Encounters with Asian Decolonisation is a significant, stimulating addition to historical scholarship on Australia-Asia engagement. We should look forward to David Fettling’s forthcoming autobiographical work, Transit: Travels in South-Eastern Asia. Details about this book and other food for thought can be found at <ahref=”https://davidfettling.com/”>https://davidfettling.com/

1. I thank Feng Zhuqin for helpful advice on drafts of this review.
2. Ginzburg, Carlo. The Cheese and the Worms: The Cosmos of a Sixteenth-Century Miller. London: Routledge & Kegan Paul 1980.
3. Ibid., xiii.

PETER GIBSON is a PhD candidate at the University of Wollongong. His thesis is about Australia’s Chinese furniture industry in the period between 1880 and 1930. He has published in the Australian Economic History Review, Labour History and Chinese Southern Diaspora Studies. He is passionate about bringing unheard voices into the narrative of Australia’s past.