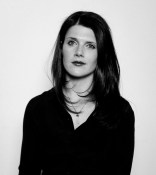 It would be wrong to say he bought me. It’s never like that. He chose my photo, my description; I received a call from the agency; then we met at a dimly lit restaurant with black banquette seats. He ordered champagne and a platter of sushi and sashimi, the slivers of fish pink and glossy, like tongues.

‘You’ll have to teach me how to use chopsticks like that,’ he said.

We negotiated terms. Of course, it’s not as businesslike as that. He talked about what he wanted – companionship, someone to take to dinners and parties, maybe with a view to the long term, depending on how things progressed – and when I didn’t object, he relaxed, ordered another bottle of wine.

He said he loved the way I had trouble with certain phrases – fifth floor, not at all.

After a few weeks, I had my own credit card.

After a year, he said he wanted to marry me.

I took his last name. But at night, in our futon with the koi-patterned sheets, he would whisper Mitsuki Tanaka, Mitsuki Tanaka. Even then, he was always trying to get his accent right.