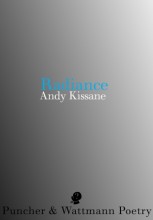 Radiance is Andy Kissane’s fourth collection of poetry. In my view this collection is a subtle change from, but consistent with, his previous books of poetry (1).

Kissane may be setting out his thesis in the poem ‘Summer’, in which he writes:

Poets are always searching for how things might fit together,
the tongue and groove illusion, the Fibonacci sequence
that can be found in both nature and the sonnet…(61)

The Fibonacci sequence is the mathematical term given to number sequences which progress like this: 0, 1, 1, 2, 3, 5, 8, 13, 21 and so on. You add the penultimate number to the ultimate number to get the next number. It’s applied for computer algorithms and graphs. The sequence can also be seen in biological settings, such as branching in trees, the arrangement of leaves on a stem, an uncurling fern and the arrangement of a pine cone. (2)

It seems apt that Kissane refers to the Fibonacci sequence in his work. The sequencing, the attention to lineation and homogeneous stanza lengths, and the appreciation for the organic qualities of the natural world: all these things are present in this beguiling, deceptively off-hand, careful poetry.

In ‘The Bluetongue as an Answer to the Anxiety of Reputation’, Kissane writes:

When I take the poets on a tour of the garden,
Liz comes out from under a log, a life model
unveiling for a portrait. She’s happy enough to bask
in the warm afternoon sun and soak up the attention.
Why fret about where you are in the scheme of things?
Instead, cultivate the blissful solitude of a bluetongue,
grow fat and warm on the exposed rocks
that nature bequeaths you and occasionally open one eye
to gaze at the theatrical manoeuvrings of those
whose blood is thick and cold with unfulfilled ambition.

The documentary method brings its readers news from the world. In the book’s first poem, ‘Flight’, the poet gives a tantalising prescription: ‘take the afternoon off and head out past Kurnell/to Cape Solander. There, on the white sandstone cliffs/above the vast flood, look for humpbacks’. You are not above the sea or the ocean, you are above ‘the vast flood’ to witness ‘the corrugated whiteness of [the humpback’s] wobbly ascension,/the dark certainty and blazing glitter of its fall’.  And in doing this, even though ‘you cannot name the endangered species/growing in this headland heath’, ‘you can close/your eyes, you decide to do this simple thing,/…/ aware now of this immense, unknown life/going on around you, within you, as the buffeting,/lunging wind picks you up and gives you wings.’

As Kissane writes, these are poems made as a result of ‘A radical attention to the world’(3).

The particular Kissane quality that results from his radical attention to the world is the manner in which he shows us what he has sensed. It is conversational, deeply versed in the Australian vernacular and delivered with a light touch. The reader is never far from a gritty humour and follows the long lines and chatty everyday-ness until they are deeply, unwittingly, in the numinous, the spiritual and the wondrous. The wings the wind gives to the whale-watcher at Cape Solander appear and reappear in many guises, as ‘two tiny bumps forming/near your shoulder blades, the beginning of wings, perhaps,’(4) and ‘when I first loved you and we soared over the harbour, our wings stretched out in effortless, astonishing flight’(5).

To give context to the ‘radical attention to the world’ quote:

… A radical attention to the world
leaves much that cannot be understood, let alone described
no matter the facility with language or craft.(6)

Kissane makes a terrific fist of both. These are elegant meditations, perhaps prayers, which have a touch of magic realism—by which I mean, and probably inaccurately, a little of the sub- and un-conscious—which move us organically toward an understanding. Kissane achieves this with detailed, nuanced description:

The mist seems to lift a little and I notice a woman
wearing an ankle-length dress and a wide-brimmed hat
walking beside me on the strand. I realise that I’m out
perambulating with Virginia Woolf who is talking to me.
“What are you doing in my Cornwall diary?” she asks.
“Well, at least you’re not one of my characters.
I’m sick of the way they think they understand themselves
better than I do. But if we’re going to spend any more time together,
you’ll have to stop that infernal overwriting. What did you do,
swallow a Latin thesaurus? Perambulating? Really, it’s too much.”
I nod at Virginia while dodging an incoming wave
that’s about to soak my Converse runners, but she’s already
striding up onto the headland where she says
we might catch the purple shadow of the pilchards
as it slides across the face of the sea like a blush.

From ‘Three Visions of Virginia Woolf’ (36)

The result, as this quote intends to demonstrate, is a poetry which is revelatory, humorous and intelligent.

The persona of these poems is a man in maturity, ensconced in suburbia, driving, cooking, parenting, arguing, writing; his social conscience is not jaded, he is able to understand what it is to love the women in his life, he’s not scared of being compassionate, not scared by long-dead writers (such as Virginia Woolf) communing with him, and he is attentive to the madness, the incomprehensibility and the deliciousness of what takes place inside and outside one’s head:

…people of hard muscle and freckled skin,
friends I’ve lost contact with, writers whose work I love,
all of them clamouring for fish soup and conversation,
as we suddenly stumble on what we really think
here on the balcony within the visible and vanishing air.

from ‘Prelude: Angophora Submerged in Fog’ (24)

Kissane understands and accepts his place in the world: ‘I perform a role/crucial for adolescent wellbeing: efficient driving.’ But his place in the world is also as witness and curator. He stays at the Canterbury Ice Rink, watches as his daughter goes off in her electric blue jacket to practices her Lutz:

I can see her as she concentrates on the long backward
glide, digs her toe pick down hard into the ice, lifts
and spins into the air, striving with her whole body
to land this difficult jump for the first time
from ‘Trip to the Ice Rink’ (61)

In his curatorial role, he selects material from his ‘radical attention to the world’ and he selects the quantity and manner in which it is presented. Kissane excels at using what he calls ‘the grit and gyprock of words’ (60). He fashions the poems into elegant patterns on the page and is fond of three-line stanzas. All this apparent ease of expression, rather like his daughter at the rink, is practised and wrought. He has divided the book into four sections and each section has within it a narrative of meaning, with the poems carefully sequenced to develop the thought. Within the poems, the flowing lines have careful line endings, the words at both end and beginning of the lines selected to bear the slight emphasis of their position in the line and there is plenty of enjambment to lead you (often literally) down the garden path, past the joke to ‘suddenly stumble on what we really think’, and to radiance. This poise, this hard work in selecting and arranging, brings a subtlety and structure to this mature poetry. It makes for a very elegant book.

The final part of the collection, The Sea of Tranquillity, is a long riff on the metaphor of Kissane being married to the Moon, which he personifies effectively.

‘Like an umbraphile, I drove a pale green Corolla
up the Hume Highway from Melbourne to Sydney
with my belongings in the boot and a rolled-up futon
crammed into the back seat. Arriving at a friend’s house
in Croydon Park, The Moon opened the front door.
I saw shadow bands, a single intense diamond
and a fluttering corona pulsing around her outline.
When she stepped forward, I realised she’d been blocking
the light in the dim hallway. She smiled and her top lip
glowed with these red spots, but when I blinked
they were gone. She wasn’t even wearing lipstick.
I was launched into blissful orbit, stranded in the trackless
heavens, unsure of the right angle of attack,
how to come down to earth without burning up.’

The Sea of Tranquillity brings together the components of Kissane’s very particular style which are at work in this collection: his magic realism; his ability to describe love and adoration, warts and all; his humour; his long narrative line and his unveiling of radiance/Radiance. The collection as a whole is slender, elegant and well-constructed.

ANNA KERDIJIK NICHOLSON‘s second book, Possession, received the 2010 Victorian Premier’s Prize and Wesley Michel Wright Prize. In 2011 it was shortlisted for the ACT Judith Wright Prize and the NSW Kenneth Slessor Prize for poetry. She trained as a lawyer, lives in Sydney and is on the board of the national poetry organisation, Australian Poetry.