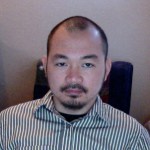 Rey Escobar lives in Evanston, IL. with his wife Christine, founder of Green Parent Chicago (http://greenparentchicago.com), and their two self-educated kids, Ezra and Lucie. He is a member of the Next Objectivist, address in the ether: http://nextobjectivists.blogspot.com/, physical evidences: twice a month at http://messhall.org/