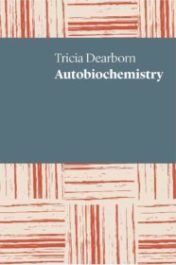 What are the elements – multiple, multivalent – which constitute and compose us as individuals, as bodies in time and place? What are the factors which make each of us precisely who we are, as well as who we might become? In her third book of poetry Autobiochemistry, Tricia Dearborn uses the analogy of the chemical elements which comprise physical matter as a framework for understanding a range of elements which contribute to a building of ‘self’: memory, childhood, the specificity of experience, sexual desire and love, the mesmerising world of ideas and of language itself. This is powerful poetry, engaging in its directness and emotional honesty and further establishing Dearborn’s position as an important voice in Australian poetry.

Riffing on an undergraduate experience in biochemistry, the poems in the first section are clustered under the signs of the periodic table; both separately and as a sequence, they gather and interpret various aspects of the speaker’s experience. In ‘Fe Iron,’ for instance, the poet recalls her first bleeding, recorded in her ‘pale blue Hollie Hobbie diary’ (p. 26); in ‘O Oxygen,’ she re-inhabits the gasping for breath as a childhood asthmatic, ‘hauling in triumphant/catch after catch of air’ (p. 15).  In ‘C Carbon,’ the poet recognises and celebrates the permeability between the individual body and the structures of the universe, between the brief passage of our personal lives and the wider currents of time:

When my body stops, its carbon
will be freed as carbon dioxide

The poem ‘Na Sodium’ explicitly explores a fundamental tension between the search for a mythical element of stability and purity – a kind of prima materia ‘incorruptible’ as she describes in ‘Au Gold’ (p.35) – and a recognition of impurity or change as the only possible constant:

I wanted to be the pure metal
solely myself, self-sufficient,
swaddled in the safety

a dollop
of the genetically new,
from the outset, chemically intermingled

then we separate, but never completely
even when we feel entirely alone
our mirror neurons

Connecting and being separate, wanting engagement yet feeling at the margins of acceptance, celebrating individuality and pushing the world away – these ambivalence and defences mark the recollections and re-inhabitations of childhood encountered in these poems. However, in the section ‘Covalent Bonds,’ there is a definite movement toward connection and an acceptance of the risks and sustenance of loving in its different forms. ‘…how lucky/that I outlasted/my inability to feel loved,’ she writes in ‘At last’ (p. 44). It may be painful to reach the point of release, but eventually  ‘unexpectedly love/came flooding in/throwing the world open.’ Such connection is not sentimentalised in these poems. In ‘Phelgm: a love poem’ for instance, the labour of loving, ‘its energy and joy,’ survives even the contrariness and staleness of illness with its ‘fluorescent yellow-green phlegm’ (p. 40) and the disturbances of sleep. Similarly, ‘Ride’ explores the incipient violence of sexual encounter to identify the abrasion of surfaces which might exist even between two people who love each other: ‘my stubborn selfishness, your willingness/when pushed to ride roughshod’ (p. 39).

In the poems included in ‘Virginia Woolf’s memoirs,’ Dearborn shifts the focus from a more introspective style to consider how another person – someone else who is also a writer, who has documented and narrativized aspects of their experience and thinking – manages the complex elements of her ‘autobiochemistry.’ The Woolf whom Dearborn delineates, a little like the artist Lily Briscoe in To the Lighthouse, is both overshadowed by a-figure powerful father – ‘while he was in focus/you could not be’ (p. 50) – and struggles to be seen by a mother who would always serve husband and sons first:

Despite your singularity
her eyes, which were yours,
never saw you (p. 51)

And when Woolf undertakes her own explorations of self and memory, she too finds ‘liars in the house,’ a violence at the heart of the family romance:

…When you started tunnelling
in earnest, excavating

the caves behind yourself,
a small you was spotlit

on that ledge, your half-brother’s
hand under your clothes
(p.58)

The ‘Elephant Poems’ see Dearborn undertaking her own tunnellings of memory and psyche, enabled by the caring structures of therapy. As in ‘The invisible elephant,’ this involves the excruciating process of admitting to the dominating element which has always crowded the psychic space of her life, ‘us[ing] up the room,/ breath[ing] my air/ fou[ing] the floor’ (p. 62) – no longer avoiding or pretending, but actually naming the debilitating shape of pain: ‘the shape of/stifled cries in the dark/fear of footsteps/waking in puddles’ (p. 63). This psychic and linguistic process of addressing what has been unaddressable – ‘to discover, astonished,/that the world is not made of amber/then to haul myself bodily/from the viscid exudate/of my father’s lies’ (p. 69) – is to find the possibilities of making one’s own self, of moving into a life which might exist  ‘beyond amber’ and its frozen denials.

The poems included in ‘The change: some notes from the field’ are, by comparison with the emotional suffering and labour alluded to in the Elephant poems, celebratory. In these poems, which detail the inexorable rising of the hot flush, the loss of predictable patterns of ‘’bodily knowledge’ and being largely bodily and emotionally adrift where ‘conditions are choppy out on the water/storms blow up from nowhere’ (p. 93), there is nevertheless an acceptance of the literal integration of self and biology. In the playful concrete poem ‘Perimenopause, in which everything is a fan’ (p. 96) a life of love, creativity, family, connections, art and the physical body are brought together, seemingly no longer at war. Indeed, as ‘Perimenopause as uncertainty and invitation’ would suggest, this ‘change’ in the life of a woman is as much opportunity as loss, a space and time enabled by the biochemical in which to grasp a challenge for directness and courage and excitement:

a frankness
you never dared

a mission
should you choose to accept it

to take no shit
for the rest of your life

Not only is it refreshing to read about hormonal changes in a woman’s life as part of the vital stuff of poetry, but these final poems do also suggest something of a triumphant gathering together of the troubling elements of experience, of being one’s self in the world.

Autobiochemistry is about the relationship between parts and whole, between the elements which shape us and the selves who emerge from that process of influence; these poems traverse that tension and impel us to enquire into the extent of the agency which might be possible in the emergence of self. As Dearborn writes so movingly in the poem ‘Your life as a jigsaw,’ we can only work with what we’ve got –  analysing the pieces, trying to find what’s missing, trying to interpret and reincorporate fragments of colour and shape into an overall pattern that is meaningful, to take a path forward:

enough pieces matched
by painstaking experiment, by guesswork, by luck

until there is enough tree, or sky, or land or water
for you to see
which way is up
(p. 76)

ROSE LUCAS is a Melbourne poet and Senior Lecturer at Victoria University. Her first collection, Even in the Dark (WAP, 2013) won the Mary Gilmore Award; her second collection, Unexpected Clearing was also published by UWAP in 2016. She is currently completing her third collection, This Shuttered Eye.