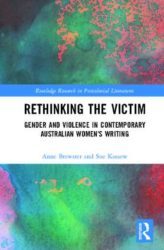 by Anne Brewster and Sue Kossew

First of all, I owe readers a disclosure: if this book is an interrogation of power asymmetry and its potential to foster violence, then it’s disquieting that both its authors and reviewer embody a white middle-class lens on experiences largely rooted in less privileged positions across society.

Brewster and Kossew are acutely aware of this imbalance throughout their dense, often illuminating book, which explores writing about violence from women whom they identify as either majoritarian, Indigenous or minoritised. The theorists tussle with the tension between what they perceive as the need to open up a cross-cultural conversation with radical empathy and the need to avoid “perpetuat[ing] the invasion” (Nicholson, 2000). At several points, they account for their decision to engage with the works of Indigenous and minoritised writers by citing various authors’ own calls for their inclusion in the Australian literary canon. One example is Filipino-Australian writer Merlinda Bobis’s comment during an interview with Mascara Literary Review that her book, Fish-Hair Woman, professes “a reciprocal love between cultures” and her broader comments about the difficulties of “getting through the literary gate” in Australia (p.191 / Bobis 2015).

Rethinking the Victim is divided into four chapters with an overall integrative approach, though the academics focus on Aboriginal poetry in its own chapter (‘Violence against women and girls: Indigenous women’s activist poetry’); this perhaps speaks to the statistics and the specificity of violence against Aboriginal women. In Chapter 1 (‘Intimate violations: gothic and romance’), Brewster and Kossew reflect on wide-ranging texts such as the writing of Yugambeh writer Ellen Van Neerven and of Asian-Australian writer Chi Vu. In Chapter 3 (‘Broken families, vulnerable children’ and Chapter 4 (‘War and political violence’), analysis of CALD writers is again interwoven with reflections on texts by white middle class women.

While paying attention to their own embeddedness in power structures, Brewster and Kossew rightly suggest that cultures do not exist in a vacuum – all gender dynamics occur within the systemic inequality that extends worldwide. Global estimates indicate that one in three women will be subject to violence in her lifetime, and the bleak reality is that one woman is killed by her partner every week in Australia. Despite this horrific universality, representations of violence against women vary significantly. For instance, the theorists point out the “mediatised” way in which Aboriginal family violence is portrayed in the public sphere, with implications that it is distinct and “endemic” (p.94). In contrast, they observe the way in which “violence in the white middle-class home has traditionally been exceptionalised, hidden and relegated to the private sphere”, noting this cultural exceptionalism as a reason for broadening the dialogue around gender-based violence (p.17-18).

Here’s another disclosure: this latter observation was one that hit home, so to speak. It took a long time to face up to the fact that my (white middle-class) household was a place of violence, and that I know what it is to be and to see a girl/woman enduring many years of threats and assaults by a boy/man. I also knew, without instruction but through a hazy sense of loyalty and self-preservation, that the topic was absolutely taboo. Much of this book’s analysis therefore delved into familiar territory: a world of precariousness, futile attempts to ‘fix’ perpetrators, and the incremental ways in which women become trapped. Why am I sharing this? I suppose it’s in the book’s spirit of “reject[ing] the fear of stigma, shame and failure that often prevents white middle-class victims from breaking with notions of propriety” (a function which the theorists attach to novels such as Evie Wyld’s All the Birds, Singing, Emily Maguire’s An Isolated Incident and Anna George’s What Came Before) and in response to the appeal for solidarity that runs throughout Rethinking the Victim (p.18).

Since Rethinking the Victim forms part of the Routledge Research in Postcolonial Literatures, it is no surprise that both theorists’ research is strongly grounded in contemporary postcolonial literature. This passion comes across emphatically in their literary analysis, and they write extremely persuasively of the intersections between colonisation and violence (particularly in terms of Australia’s “national burial of a suppressed violent past”, p.50). I’d argue that this is occasionally to the detriment of the gender analysis – for instance, their seven-page exploration of Paula Abood’s ‘Stories from the Diaspora’ (2017) is a highly detailed study on race and violence, but barely touches on the aspect of gender (p.203-10). This is perhaps an insight into how gender may be the main issue for white women writers, while for women of colour (such as Abood) race and colonialism are such overpowering oppressions that there is less emphasis on the gendered perspectives.

Furthermore, to the best of my knowledge, the book omits any mention of the gender-based violence meted out to those who are trans or non-binary. According to Transgender Victoria, transgender and gender-diverse people experience physical assault, or threat of physical assault, at a rate of 25% – twelve times the rate of the general population. One example of a fascinating and necessary text that was missed is Australian-American Sarah Krasnostein’s The Trauma Cleaner, which won the Victorian Prize for Literature among other awards. This is a compelling story following the author’s acquaintance Sandra Pankhurst, a trans woman, throughout her life, which includes chronic violence – from a childhood of domestic abuse to the attacks that she endured in Melbourne’s drag scene and sex industry. It’s a book that interweaves closely with numerous strands of Brewster and Kossew’s analysis, and highlights the unreliability of trauma narratives.

Having said that, Rethinking the Victim is a remarkable feat and, notably, the very first book to examine gender and violence in Australian literature. How can it have taken this long? This is an important, intricate book which gathers together a wealth of literary analysis. The breadth of research and the depth of compassion is clear on every page. The astounding fact remains that this is only the first book to study gender violence in Australian literature – and there is much, much more work to be done.

SOPHIE BAGGOTT is a Welsh writer and journalist in the human rights field, currently living in Melbourne and working at the International Women’s Development Agency.