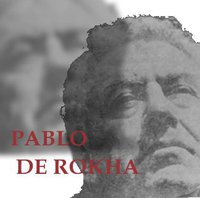 Pablo de Rokha (1894-1968) was born as Pablo Díaz Loyola. Despite his profound influence upon subsequent generations of Latin American poets, he failed to achieve the international fame of his contemporary, Pablo Neruda (with whom he quarrelled fiercely and publicly). In 1965 he was awarded Chile’s National Literature Prize, deemed by many at the time to be long overdue. He committed suicide at the age of 73.

God, that great human caricature, God, full of empty skies, sad consciences, sad consciences and GREAT anguish, his neutered cadaver’s voice brings together and sums up, FOR man, in his common and disconcerting attitude, the moaning of every object and, in addition, the other, the distant, the other, the other, like the words of a naive child, a naive child, a naive child; bad God, good God, wise God, stubborn God, God with passions and gestures, virtues and vices, concubines or ILLEGITIMATE sons, with an office like a pharmacist’s, like any hairdresser’s.

Tragedy of God, God, God, the major disgrace of history, the lie, the PHENOMENAL blow to the rights of life, God.

Great absurd wing, God extends himself over THE VOID…

Dim, illiterate, ignorant, ignorant soldiers, you predated the immense, contemporary urban estates and you were THE FIRST settlers of the dull brown, dull brown earth, dull brown, humble, agricultural, BLUSHING like a woman who is discovered naked; free to draw your daggers, you pursued two destinies: to be hung at the gallows or crowned with laurels.

And you’re called Pedro de Valdivia, Hernán Cortés or Francisco Pizarro, Napoleon, you’re all the same: brave, drunken swine, demented or crazy geniuses, contradictory, bilious – that is, IRRESPONSIBLE instruments of cosmic DYNAMISM and LIFE’S nocturnal forces; CONQUISTADORS, I salute you because you were a lot of dreaming-poet-leaders crossing the horizon’s SEVEN HUNDRED hardships with your absurd, painted-on, metaphorical costumes and resonant, fantastical attitudes, full to the brim with illusions, ambitions, heroic, enormous emotions, eyes full of landscapes, sleeping in the shadow of a great, distant dream as BIG as THE SKIES, and not ten cents, not ten cents in your pockets!..

Stuart Cooke’s chapbook, Corrosions, was published by Vagabond Press in 2010, and his translation of Juan Garrido-Salgado’s Eleven Poems, September 1973 was published by Picaro Press in 2007. His first full-length collection, Edge Music, is forthcoming in 2011.