The Boy Who Believed in Magic by Zahid Gamieldien 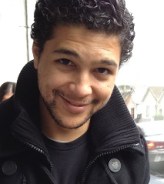 Zahid Gamieldien is a writer, tutor and former lawyer. In 2015, his fiction has been published in Overland, Tincture Journal, Bahamut Journal and Pantheon Magazine.

The Boy Who Believed in Magic

The camp gets attacked on a Monday afternoon. I’m in the antechamber of the medical tent, administering the vaccine for measles, mumps, and rubella to a young girl. She’s afraid of the syringe, and I tell her not to worry, that everything will be okay. Her mother soothes her in Manding language, probably Dioula, but even she seems tense. The girl is bawling and I call the Dutch nurse, Klaas, into the antechamber.

I’ll show you a magic trick, I say to the girl.

Klaas nods and I turn to a cabinet, on top of which is a Styrofoam cup. I make a small hole in the cup and push my thumb through it, and then I grip it with both hands. Feigning intense concentration, I lever my fingers and palms from the cup, which is held in place by my obscured thumb, and I shiver the cup through the air as if it’s levitating. The girl goes quiet. Klaas kneels beside her and swabs her upper arm with an alcohol wipe. He jabs her with the syringe. She begins to wail and I grab hold of the cup while Klaas and the girl’s mother apply a bandage to her puncture. Sighing loudly, I return the cup to the cabinet and listen to the girl’s crying fade from the medical tent.

You should give this doctor business up and get into the magic shows, Klaas remarks. We chuckle; I like the way he shushes his S’s.

I’m about to reply when I hear a convoy of jeeps in the distance. Klaas and I step out of the medical tent and stand there, watching. The camp is in chaos. People are running every which way: some roil the dirt as they sprint to nowhere; others dash into their tents, which are draped in white sheets like Halloween houses or Californian bungalows being fumigated. The sheets carry UNHCR branding.

Through a rust-coloured cloud of dust, I spy a man that I recognise. He’s barefoot, carrying a machete, leading his family toward the dirt road.

It’s better for you to run, doctor, is all he says.

The regular doctor at the camp, a South African named Sissy, sprints past me and into the medical tent. Klaas and I follow her. She heads for the tent’s main room, which has two rows of eight hospital beds divided by a narrow aisle. I realise that most of the patients must have fled behind my back: only four remain, and each of them is unconscious.

Too late to move them, Sissy grunts.

Klaas and I wear guilty expressions and now, close by, I hear peals of gunfire, the screech of brakes. My skin feels numb, tinnitus in my ears — no, not tinnitus: I can isolate the screams of individuals, of children, of women, of men, and they get cut short, these screams, abruptly, like when you press the mute button on a TV remote.

Klaas’s brow is moist; he wipes it with a shaky hand. Sissy, the only one of us with her wits about her, drags a sheet up over the face of one of the patients. Klaas and I realise what she’s doing and we follow suit, until the four patients are entirely covered. We head back to the antechamber and wait.

The footsteps on the ground are heavy, jackbooted perhaps, and I know immediately that the people sheltering in their tents are not going to survive: their choral screams rise and grow elliptical and fall silent, the tempo dictated by a grim layer of percussion. I dap my Adam’s apple in my throat and try not to picture it, but I can’t help it. Klaas whimpers; he’s pale as a waxwork and wet with sweat. Sissy places her hand on his back, as if to steady him in case he passes out. Her mouth is shut tight.

Two soldiers, dressed in black shirts and camouflage pants, enter the antechamber. Both have AK47s. One of the soldiers is tall, not yet twenty; he’s wielding a machete as well as a gun. The other is pubescent, a boy, although he has no laugh in him and his brow is as creased as a forty-year-old’s. The tall soldier raps something in a Kru dialect, directing his question at Sissy. He jerks his rifle toward the main room. Sissy stares at him dumbly and he repeats the question in French.

The tall soldier ambles into the main room. He pauses near a covered patient and slings his AK47 over his shoulder, and then he takes out his machete and drives it through the patient’s chest. There’s the crack of a ribcage and the gurgle of blood in a throat, the strain of ungreased bedsprings. I stifle a scream, Sissy’s eyes go to her feet, and Klaas holds his breath. We don’t watch any more. The tall soldier returns to the antechamber, dragging behind him a white sheet with which he wipes the stains from his machete. He shrugs and says something to the boy, before he drops the sheet and exits the medical tent.

The boy’s forehead grows more serious and he’s yelling at us in Kru which, of course, none of us can understand. He’s becoming frustrated and I realise that he’s asking us — no, ordering us — to turn around so that he can shoot us in the back. We comply, slowly.

I glance over my shoulder: the boy is unmoved, or otherwise, he doesn’t understand. I see that Sissy and Klaas are holding hands. Klaas is muttering a prayer. They’re resigned to their fate.

I’m about to clasp Sissy’s other hand when I spot the Styrofoam cup on the cabinet, and I don’t know why, but I grab it and push my thumb through the little hollow in it.

I’ll show you a magic trick, I offer.

There’s confusion on the boy’s face, yet I press on with the routine, releasing the cup from my hands, leaving it perched on the end of my thumb, giving the illusion that it’s defying gravity.

He takes a couple of paces back and glances outside of the tent. I crush the cup in my hand. Sissy’s expression betrays her puzzlement, Klaas’s his relief. The boy mimics turning a key in a lock, and I’m confused.

I think he wants a car, Klaas observes.

I take my keys from my pocket and jangle them, as if I’m performing another trick. The boy beckons with his rifle and I cant my head to the others, indicating that we should follow.

In single file we step out of the medical tent. In Dutch, Klaas recites the Lord’s Prayer. The camp is a Golgotha of corpses upon which dust is settling like ash, like in the aftermath of a volcano. The tents are silent and riddled with buckshot. Sissy’s hand is over her mouth. I also want to vomit. The boy prods me in the side with his AK47 and we walk — the three of us now in front of him — toward the dirt road, past booted and barefoot soldiers, and the dead, and firewood that is being kindled for a pyre. In the shade of a palm tree is a group of armed men, who laugh out of the sides of their mouths, gravely, or as if they’re chewing tobacco.

As we reach the dirt road, I can hear yelling from behind us. It’s the tall soldier. He’s about thirty metres away, striding toward us and waving his hand to call the boy back to the camp. I expect the boy to stop, but he presses the AK47 against my spine, forces us to quicken our pace. We get to my four wheel drive, which is near the parked convoy of jeeps, and the yelling is getting louder, closer.

I jump into the driver’s seat and the boy gets in the other side, pointing his gun at me. Sissy and Klaas hop in the back.

They buckle their seatbelts. I start the engine and immediately my window smashes. The tall soldier is opening fire on us. I reverse and lose the back wheels in a ditch, and I hear them spin unavailingly, and the spittle of bullets against the side door, and then the tyres gain traction and we’re away.

Once we’re out of sight, I move to switch on my GPS and the boy stays my hand.

Where do you want me to go? I ask, and he shuts his eyes in meditation.

The boy opens his eyes and yawns. Miles of dead road drift by, and when we reach a fork he indicates that we should take the road to the left.

The other way goes to the city, I suggest, pointing. He sits up straight and places his finger on the trigger; he’ll brook no argument. I say, Okay, okay.

After we’ve been driving for ninety minutes, the boy straightens his fingers. I bring the car to a halt near a village that’s been burned to the ground. There’s no sign of life; only the outlines of the dwellings remain. The boy taps his chest and blinks back tears.

I think he was kidnapped from here, I say. We drive a little farther down the road and then get out of the car. Beside us is a dried up cocoa plantation, the trees forked like dowsing rods that have lost the art of divination.

As we enter the plantation I notice that there’s a camp there, hidden from the road. Tarpaulins are tied to the branches of the cocoa trees and curious people with sunken eyes begin to emerge, to study us as we approach. The boy says something to a middle-aged woman, who nods approvingly. He guides us between rows of trees to one of the campsites near the end. It’s sheltered by a faded tarp and there’s an old man seated there. He’s fanning flies from the face of a woman, an elderly woman, who’s lying on the ground; she has a severely infected wound on her neck and her lips have gone white. The boy puts down his weapon and holds her hand in both of his.

He gazes up at Sissy. Dok-toor? he implores.

The breath flows heavy through her chest. She shakes her head. Sorry, she says. There’s nothing I can do. Désolée.

The news sinks in, and then the boy’s eyebrows rise with hope as he looks to me. Mah-jik, he says, and I begin to sob, and I see that Sissy’s jaw is tight, and Klaas has his head tilted to the sky, and I watch as the boy realises that there’s no such thing.