The Cup by Xiaoshuai Gou 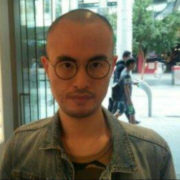 Xiaoshuai Gou was born and raised in China. He has been working as a teacher of English and Mandarin as a second language and is  currently pursuing a Bachelor of Arts at the University of South Australia.

The cup itself wouldn’t amount to much significance to any stranger: crude ceramic, plain design, with a kid happily pursuing dragonflies under the summer sun. It was randomly picked up at a reject shop by the pregnant mother. The joy flowing on the kid’s face perhaps had something to do with it.

A skinny boy was born at the end of March. It was the first time the pregnant mother became a real mother, and many things had to be learned from the start and properly handled. The difficulty caused by the absence of a father was aggravated by the fact that the new mother soon turned out to be milkless. All manner of baby formulas were then brought to her, from various countries, and via the hands of all kinds of people. The cup was useful for the first time, and the mother diligently washed it after each time the formula was fed to her baby.

Two months later, the content of the cup began to change. At first, formulas were still the staple of it, with occasional pills crushed into them to add extra nutrients for the proper growth of the newborn. Then things changed to almost the complete opposite. Pill powders of all brands and colors started to take hold of the cup, while non-stop coughs of the baby boy rendered the formula feeding increasingly pointless. With the same diligence, and with growing amounts of quiet tears, the mother continued to wash the cup. But a stubborn dark stain was still irreversibly engraved into its interior wall of once milky smoothness.

Then came the summer. The coughing finally subjected the infant boy to the 24/7 protection of the hospital ICU and the vigilance of its nurses. Pills stopped being crushed. Full tins of formula were stashed away without the prospect of ever being opened again in the future. Suddenly all things ceased to be of any meaning. The mother’s distress grew more and more visible every time she watched her baby son through the ICU windows, until eventually she was declared as suffering from severe postnatal depression, and was subsequently hospitalised in the same hospital as that of her infant son. The cup washing was abandoned.

The next summer differed from those preceding it with its excessive rainfall. This posed a serious problem for the old grandma who had a flower garden at her back yard. For the bulk of the summer, she had to juggle constantly between visiting the hospital where her depressed daughter was showing clear signs of recovery, and salvaging the small garden frequently in danger of being washed away by the heavy rain. Luckily her efforts paid off in the end. Both her daughter and the garden survived the rainfall spell at the end of summer. And as did her late grandson’s tiny grave at the north corner of the garden, with a solitary ceramic cup placed in front and mounted with dirt and rain water.