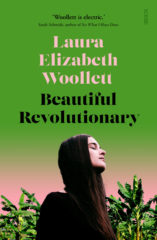 Laura Elizabeth Woollett’s first novel, Beautiful Revolutionary, takes the reader into the lives of several members of the Peoples Temple, the socialist church created by the charismatic, manipulative and controlling preacher Jim Jones in California in the 1960s. The novel follows the church’s expansion in America and eventual mass exodus to Guyana where Jones and his devoted followers established a community, named Jonestown, deep in the jungle. There, on November 18, 1978, as a result of Jones’ increasing hysteria, drug use, and paranoia, Jones commanded his followers to commit what he describes in Woollett’s novel as ‘revolutionary suicide.’ The death of 918 Americans at Jonestown is an event that remains deeply embedded in the cultural imaginary, and Woollett’s novel is one of a number of recent works on the event, including Jeff Guin’s non-fiction book The Road to Jonestown (2017), the 2018 documentary Jonestown: Terror in the Jungle and upcoming HBO series Raven, based on a non-fiction account of the same title by Tim Reiterman (2008). When I began Beautiful Revolutionary, I was interested in how Woollett might add to this substantial body of work. What does this book have to give that other documentaries, television series and books on the subject haven’t covered in the 40 years since the event?

Her first book, the collection of short stories The Love of a Bad Man, also includes a story set at Jonestown. In Beautiful Revolutionary Woollett expands on these themes, narrowing her focus to a single historical moment and the chain of events that led up to it. Like many historical novels, the reader knows, to some extent, where the novel is leading us – the inexorable movement towards the final, apocalyptic days of Jonestown ratchet up the pace of the novel’s second half. The great strengths of this novel are Woollett’s convincing rendering of character and setting, and her nuanced deployment of tone and mood. What she gives to this historical narrative is a compelling account of several loosely fictionalised characters, based on real members of the Peoples’ Temple. Woollett’s complex blending of history and fiction is grounded in extensive research; her nuanced ability to make judicious, unromanticised and unpretentious decisions about where the history in her novel ends and her fictionalisations begin makes this a captivating, original novel.

Beautiful Revolutionary opens with Lenny and Evelyn, newlywed college graduates in their early twenties, on the road. It could be any mid-century American scene – the couple have married and graduated, and are moving to Evergreen Valley, California. Evelyn reminds herself that they are going ‘to the new life, and it will be new, and it will be beautiful’ (5). Evelyn’s relentless authoritarian streak will later fully emerge to immense effect, but the early pages of the novel simmer with her desire to dismiss her growing dissatisfaction. Her husband, Lenny, is seen by so many in the novel as a gentle soul, Evelyn’s ‘beautiful blue-eyed boy-husband’ (398), who is ‘sweet and soft and clean’ (38). He wants to get high, watch TV, have sex with his ‘oppressively brilliant’ (5) wife, who the reader quickly realises has ambitions that outstrip Lenny’s milder pacifist ideology in many ways.

Their relationship is rife with mismatched intentions and further complicated when, after a few weeks in their new town, Evelyn – the daughter of a progressive pastor – begins to attend church services at a new church called Peoples Temple and takes her husband along to hear a man called Jim Jones preaching. Evelyn and Lenny Lynden, like many characters in Woollett’s novel, are modelled on real people; in this case, Larry Layton and his wife, Carolyn Layton, who went on to play an instrumental role as part of Jones’ inner circle. For the first third of the novel, the intimate third person narration is closely tied to Lenny and Evelyn as their relationship changes as a result of their growing engagement with Peoples Temple, and Evelyn’s developing personal relationship with Jones. Jones himself is a ubiquitous presence in every character’s mind, but is ultimately a supporting character.

The evocative intimacy of Evelyn and Lenny’s perspectives in the first third of the book gives way to a slightly more unbalanced treatment of other perspectives. The reader is presented with Jim’s wife Rosaline, a fictionalisation of his real wife Marceline, whom Woollett has written about in The Love of a Bad Man, and whom she renders with sensitivity and nuance. The novel also picks up the perspective of Eugene Luce, a white cop whose suppressed homosexuality Jones alternately exploits and abuses him for, as well as a group of slightly younger Temple members as they collectively begin to plan a defection, another evocation of a real-life event that took place in 1973.

While Rosaline and Eugene are closely tethered to the unfolding complications of Evelyn and Lenny’s positions in the Temple, the defection sequence, inserted in the middle of the book, came as a slightly jarring change in direction. Wayne Bud and Bonnie Luce, for example, two fictionalised members of the defecting group, express and interrogate some of the astounding hypocrisies at the centre of the Peoples Temple, such as Jones’ promotion of mostly white people, and mostly young women, to positions of power within the Temple’s organisational structure, and the rife sexual abuse perpetrated by Jones on his male and female followers, even as he proclaims that ‘I’m the only true heterosexual man alive … but the sexual act don’t bring me no pleasure’ (166). Had the whole novel been made up of patchwork-like insights into a range of Temple members, the result might have been a book more similar in structure to Woollett’s first collection of short stories, but I felt that this foray into a broader range of perspectives diluted some of the novel’s tension.

The major counter-cultural shift of the sixties sits at the heart of the novel. Woollett presents the social, cultural and political upheavals of this time as a key motivating factor for new members, like college-educated Lenny and Evelyn, to join the Temple. One of the great strengths of the intimate third person narration is that it reveals the ways in which young people conceive of themselves and their position in the world, and how the older generation view the younger generation as an entirely new type of person. Rosaline, for example, is at first flummoxed by Evelyn’s adamant position that ‘No one can have all of Father … he belongs to the people’, then reflects that Evelyn is ‘maybe not so strange. Maybe entirely typical of the new generation’ (174). Sexual and racial tensions simmer throughout the novel. One of Jones’ aides, Terra, says to Lenny, ‘Some of these old white people, it’s like they’re all about integration on Sundays, but when it comes to living it …?’ (143). Cross-generational encounters in the novel are always inflected with a sense of insecurity that sometimes borders on suspicion, sometimes on the barely-repressed anger, racism or sexism of the older generation, and sometimes on a tenderness that is bound up with nostalgia, eroticism, or both. Eugene, in particular, finds that ‘the impertinence of these new young ladies, it rankles, makes the back of his neck hot and taut’ (153).

For the young people of the Peoples Temple, their positions in the world are almost overwhelmingly charged with the potential to create meaningful change, and this is often the catalyst for them committing to what Jones calls ‘the Cause’ so wholeheartedly. Evelyn’s first encounter with the church is couched in the aftermath of Bobby Kennedy’s assassination, and Jones’ rhetoric speaks to her sense of helplessness and anger. Evelyn’s sections in particular convey her industrious, striving devotion to Jim and to the Peoples Temple – the tone of these chapters is decidedly unromantic, unpretentious and this makes them even more unsettling as the novel progresses towards its devastating climax.

Woollett’s prose is lush and erotic without sacrificing clarity. Her ear for American dialogue and the counter-culture slang of the sixties is precise; she is judicious about how and where she deploys words like ‘groovy’ and ‘righteous’; and each character’s voice is consistent and distinctive. It is, ultimately, a book about voices, and the immense power of utterances to invoke rage, devotion, obedience, betrayal, hope. It is Jim’s voice that makes so much happen in the novel – Jim’s voice on the phone to Evelyn in the early pages of the novel, Jim’s voice that Lenny hears in his nightmares at the end, Jim’s voice that gives the final order to the community at Jonestown. Jim’s voice commanding and ordering, cursing, abusing. But for me, this is Evelyn and Lenny’s book, and their voices are complex, authentic, and always freighted with the tension of personal and political history.

Before picking up this novel, I knew relatively little about Jonestown or the Peoples Temple. While I learned much more reading Beautiful Revolutionary, it is not a novel that fetishises trauma, and never panders to the contemporary fascination with cults, true crime and other transgressions. It didn’t, in short, make me want to learn more about Jim Jones; but it did make me want to read more of Woollett’s compelling, intelligent prose.


ELLA JEFFERY is a poet, editor and academic. Her first collection of poems, Dead Bolt, won the 2019 Puncher & Wattmann Prize for a First Book of Poems, and will be published by the press in 2020. She was awarded a 2019 Queensland Premiers Young Writers and Publishers Award, and her work has appeared in Meanjin, Griffith Review, Southerly, Island and many others. She holds a PhD in creative writing, and lectures in creative writing at QUT in Brisbane.