Things I Used to Believe by Karina Ko 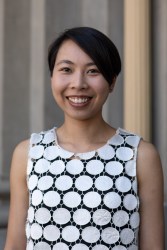 Karina Ko is from Sydney and graduated from a arts-law degrees. She is currently working on a collection of short stories.
Photo:David Patson
Things I Used to Believe

That I shouldn’t go near the dragonflies that hover over our pool because they could release a fine white powder and make my hair fall out.

That I was already bald enough at seven, the hair so fine at the corners of my forehead.

That my forehead bulged out too much, and was too high, whatever that meant.

That I was the reincarnate of my great grandmother on my father’s side because we were born on the same lunar calendar day at three in the morning. Also when I was born, I had the same big eyes and flat nose as in her funeral photo, the one on my grandparent’s ancestral shrine.

That when my grandmother saw my baby face, her big hands went up to rub her collarbones. Oh heavens, her mother-in-law has come back to keep an eye on her.

That it was why my grandmother always talked more to my brother when he and I flew over to see her. It was why her chopsticks struck the back of my hands when my fingers picked up the soy sauce chicken wing in my bowl.

That it also had something to do with my dark skin (like a Filipino’s they said). And the only time she really loved me was when she pulled up my shirt to rub a bitter minty oil and she beamed at the paleness of my aching belly.

That my cousin was more beautiful than me because she had pale skin, long thick black hair and no double chin. That if I put a clothes peg on my nose, as my mum instructed, it would grow to be more pointy.

That my mum was the most beautiful woman in the world but her nails were too sharp and scratched my scalp when she washed my thin hair with Johnson’s shampoo.

That a few nights into Chinese new year, I should walk through the streets outside our small federation house in Bexley North, past the Banksia and gum trees and announce that I am selling my laziness.

“Beautiful and delicious laziness for sale. Come and look. Come and choose. Discounted for big clearance. Look, you can even have it for free.” I mimicked the stall vendors’ calls at the markets in Hong Kong, the ones with pigs heads hanging on hooks and severed eels swimming in their own blood. My hands flew out at my sides flinging my laziness like rice grains at the dark front lawns of two storey brick houses where rich families lived.

That the spirits were too clever to believe my wares were worth taking. But that I was cute enough to make my mum laugh, happy to see her daughter making an effort.

That I could make her happy by telling her I would become a lawyer and buy her a Porsche.

That my dad was handsome when my mum met him, and that his perm, a small afro of Chinese hair, was fashionable at the time.

That Jesus walked on water and made it rain fish.

That as my mum warned, nine out of ten men were cheats and liars, the lot of them, especially the handsome ones. Except Jesus.

That ghosts liked to wander along the hall in our house. That they leaned against the tiled bathroom walls in the middle of the night when I needed to pee.

That you could hold them off by making a sign of the cross. In the name of the Father and of the Son and of the Holy Spirit, Amen.

That when Kirsten told me to blow the dandelion fluff and make a wish, it was because the fluff could capture the moment of my wish like a video. It would fly up to God where he had a special fluff VHS player and he would watch me wishing for my parents to be happy.

That as long as I kept the necklace Kirsten gave me with half a heart on it and she kept hers with the other half, we would stay best friends forever.

That in scripture class when Miriam with glasses so thick that it made her look cross-eyed, sputtered about a visit from an angel, the people who laughed were faithless hypocrites, even though I didn’t know this word then.

That there were things I couldn’t tell anyone.

That the way to be popular was to laugh at people’s jokes even if you didn’t find them funny. That most of the things people said at school were jokes, even if they didn’t start with knock knock or why did the chicken.

That when my mum was pushed against the dresser and the wedding photo fell to the floor, the shattered glass said something I couldn’t.

That the only tea one should order at yum cha is Tiet Kwun Yum oolong because it was what my mum always ordered.

That if I unveiled the pink table cloth hanging over the mirror at my mother’s dressing table, a banshee with long flowing hair would climb out. She would grab me with her bony coral fingers and pull my soul out like a flimsy silk scarf. “Children’s souls are the easiest to extract,” she would tell me in a scratchy voice, “because they are still getting used to their human form.” Then she would possess my body and trap my soul behind the mirror.

That I should never wear indigo in my hair because that is what girls wear to their mother’s funeral.

That as the palmistry book at the library said, the four vertical lines at the base of my mother’s right pinky, meant she was fated to have four children.

Belonging was like one of those cards with an optical illusion made up of tiny coloured dots. You had to stare at it a certain way to reveal a picture. According to Thomas, a friend of our big brother, it was a picture of a snake. Sensing their growing boredom, I had said, “Yes, I see it now,” when all I saw was a mess of dots scattering over each other again and again. My sister would have been the first to see the snake.

That I was a traitor of a daughter for just standing there at the end of the bed, my mum crawling on the floor with my sister bleeding inside her.

That I would have gotten in trouble if my dad found me talking on the phone, reciting our address the way school had taught us.

That I should have called even if he hit me.

That when I grew up I would never fall in love with a man. That there was no good man who would love me and my bulging forehead.

That my unborn sister was behind the mirror and watched me through the pink cloth.

That I had to kneel near the mirror each night to go through my plastic rosary beads.

That the fifty Hail Marys would help calm my sister’s sadness, which swelled at eight twenty, her approximate time of death.

That even if Jesus had forgiven us, I never would.