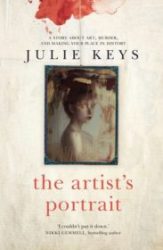 The Artist’s Portrait by Julie Keys, is not an easy novel to categorise. It’s not exactly a page turner but it simmers along with a slow sense of intrigue. It’s not quite a murder mystery, not quite drama, not quite historical fiction. Its switching perspectives and the knowledge that a key protagonist is self-editing her history make it a challenging but rewarding read. Not all is as it seem, facts are not immutable and character motivations are far from clear-cut. The novel is a debut for Keys, a writer from the Illawarra region on the NSW South Coast, who has worked as a tutor, registered nurse, youth worker and clinical trials coordinator before a nasty car accident motivated her to swap her career for full-time writing. Whilst conducting research for a PhD in Creative Arts, Keys has delved into gender and prestige for Australian writers.(1) The Artist’s Portrait was shortlisted for the Richell Prize for Emerging Writers in 2017, under its then-title, Triptych.

The Artist’s Portrait intersects the worlds of aging artist, Muriel Kemp, and nurse, Jane Cooper. The pair meet when Jane, battling late-night nausea and subsequent insomnia takes to pacing the suburban Illawarra streets at dusk in the 1990s. Their first meeting is abrasive and confusing. In Jane’s own words “whatever drew me to Muriel, it wasn’t her charm.” (333). In the work, Muriel’s sharpness but also her evasiveness when it comes to questions she doesn’t wish to answer intersect to make her a compelling enigma while Jane herself is somewhat of an every woman, with writing aspirations that set the scene for Muriel to suggest she write her life story.

As Muriel and Jane’s paths continue to intersect, Jane becomes an unwitting but dedicated biographer, soon drawn to know more about Muriel as her own research unearths mysteries around her life and her identity. Newspaper accounts tell her that the artist Muriel Kemp died in 1936 and what’s more, that she was accused of murder. Her art is shrouded with controversy, scandal and harsh criticism and there’s the matter of some paintings that went missing decades ago. The more Jane tries to grasp the truth, the more slippery it becomes. At times the entire narrative seems slippery and hard to keep a handle on, perhaps a reflection on how so much of people’s personal histories are entwined with the teller’s perspective and what they want us to know.

Keys plays carefully with the concept of the unreliable narrator, drip feeding the reader details as the story progresses through the tapes Muriel records for Jane, but never quite lifting the veil to show the full picture. Much like Jane, I found myself being pulled into Muriel’s orbit, trying to puzzle her out. The tale begins in 1914 but much of the main action takes place throughout the 1920s. The depiction of Muriel’s early life in the tenements with its gritty realism brings to mind Ruth Park’s The Harp in the South, set in the same slum streets or even Betty Smith’s A Tree Grows in Brooklyn. At 10 Muriel is caught between a childhood playing tag along “Samuel Street, with its scabby terraces of sandstone and weatherboard and iron, and balconies that looked like eyelids slumbering above the backyard patches of dirt”(8) and her first job in an artist’s studio that “stunk of cats, Lysol and turps” (3).

Keys goes on to deftly paint a picture of the 1920s Surry Hills art world so vivid that it is entirely possible for the reader to believe some of the figures she breathes life into once walked the streets of Sydney. This sense of gritty realism is highlighted by faux-quotes about Kemp’s works from authorities such as celebrated artist Norman Lindsay, whose epigraph quote describes Kemp’s paintings as having “the stench of an abattoir; the flesh she depicts is lifeless, barren- a reflection of the artist, no doubt”(1).

The novel abounds with roughness as Muriel spends time around brothels and captures coarser elements of the Surry Hills scene. It is soon clear that the art world disdains her and her works are frequently written off once critics know who painted them. One young artist tells Muriel that she, as a young woman, is “taking up a spot that could be filled by somebody who’s serious about the whole thing”(20) and she baldly states to Alice in the earlier stages of her career that “being good isn’t as important as being noticed”. However, it seems that when Muriel’s work’s are noticed, critics tend to appraise them negatively, with opinions ranging from her pictures being “ vulgar and contemptible”(1) to “the banal”(1). Notably Muriel promises herself at one stage to only paint women, sparking her Working Women series. “It wasn’t something you saw; waitresses, teachers, housewives, nuns, barwomen, shop assistants, nurses, women catching trams, walking, on the back of horses and sitting in traps- hanging out clothes sweeping. There was an abundance of subjects. Women who ran brothels and sly grog shops. I’d paint them all” (59).

Muriel quietly scorns “portraits with women with sugary lips and unshed tears” (23), instead honing in on light and shadows and “dark and violent subjects” (156).

Structurally, the delineation of perspectives becomes less clear as the narrative progresses, just as the murkiness of Muriel’s past seems to grow. Muriel’s voice on the tapes increasingly digresses, telling Jane what to leave out and dodging from one subject to another. At one stage in the book, Jane tells Muriel she’s “not much of a storyteller” (67) and the meandering tale only serves to cement that impression.

Biographer’s notes in italics interspersed throughout the text pulled me out of the narrative flow, reminding me each time of Jane’s own note to herself “do not believe everything Muriel says”(72). The writing itself is peppered with rich descriptions and clever metaphors- Muriel’s injured Nan is “a lump moulded into the rocking chair, her leg raised like a busted snag on a fruit box”(89), while on another page “two crossed branches rubbed together like cicada legs”(170).

In the 1990s narrative strain, Jane is struggling with morning sickness and the life changes wrought by her pregnancy. Throw in the reemergence of a childhood friend, now “tantalising but dangerous”(113) and her own past tragedy and you’ve got a personal history that could easily hold up a plot on its own, but ultimately it pales in comparison to Muriel’s conflicted past. Again the connection between gender and creative work is a significant theme as Muriel warns Jane that “if you were serious about being a writer… you’d get rid of that baby”(42) as they stand on the doorstep of her turps-scented house.

The 1990s setting also works particularly well as the addition of Google or online history archives would change the pattern of Jane’s research significantly. But there are no convenient buttons Jane can press to expedite her fact-finding, helping to keep the pace at a slow simmer throughout, making every big revelation feel precious, even while vital puzzle pieces remain lost.

As the novel progresses, much as a sketch might become a full blown artwork, Muriel fleshes out her past but there are still gaps and uncertainties. There is no deus ex machina here to wrap it all up with a neat bow. A second reading adds further depth but the same puzzles remain. I found myself craving more, thinking of the questions I would have liked to ask Muriel, ultimately leaving a lingering impression. The Artist’s Portrait is a great addition to the Australian literary scene, a quiet, thought-provoking achiever, that doesn’t overstate its case when it comes to gender and creative work, but still manages to say so much.