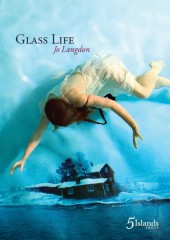 On opening the first pages of Jo Langdon’s second collection, Glass Life, one might, at first, have the sense of reading through a poet’s travelogue. Among the first few poems there are descriptions of the modernist Hauptbahnhof station in Berlin or the glaze ice sculpture of the nativity scene (Eiskrippe) in Graz, Austria. Here, a theme integral to the collection is implied: fragility and strength in balance with each other; a starting point for Langdon’s lyrical journey of introspective musings and wanderlust.

Through the snow glazed landscape of central Europe, Langdon’s poetry evokes an emotional sincerity that is not unlike flicking through undiscovered diary entries. Her emotional inclusivity combined with her technical ability is on par with the best of contemporary feminist poetry, and indeed many of her verses are dedicated or are in direct reference to poets whom she admires. Some of the titles or epigraphs are from poets such as Barbara Guest, Emily O’Neill, Eleni Sikelianos or Denise Levertov. The poem “Making love & omelettes” takes a line from poet and theorist Veronica Forrest-Thompson’s “Pfarr-Schermz (Village-Anguish)”. Feminist artists are referenced; in “After Ana Lily Amirpour,” Langdon expresses clear admiration for the Iranian filmmaker’s visual landscapes and her tongue-in-cheek attitude to the world.

These referential phrases and dedications are a small part of what makes the collection so rich. Any poet who puts their pen to paper (or fingers to keyboards) will very quickly identify other writers, past or present, to whom they owe a debt of gratitude. These dedications are like words of thanks that are now a part of Langdon’s own works in one way or another. In her poem, “Felt” we encounter the sense of dissecting the very reading of poems:

She says. ‘I felt your message
but haven’t read it
yet—’

Langdon immerses the immediate reactions of interpretation with the emotional impact of the work. We see a writer who is both writing and unpacking her poetry at the same time. She analyses the link of writing to the ephemera of rain, water, city and traffic, ending with the phrase which is quoted from, once again, Veronica Forrest-Thompson’s poem, “Cordelia: or, “A Poem Should not Mean, but Be”” itself a line derived from “Ars Poetica” by Archibald MacLeish.

Langdon is careful, though, not to let these intertextual references override her poetic task. “Then” and “Apropos” are two favourites of mine, and her two prose poems “Biographic” are delicately phrased narratives of immense power concerning the early life of her Oma in Holland ‘(a)fter the girls’ home,’at the time of the second world war. Here, the focalisation shifts from personal to public; the image of the navel is pivotal. It evokes the stigmas of poverty and pregnancy, partially exposed by insinuation:

…To jam on bread her moeder
said, What, you’re pregant as well now? This new shame. How
awful, she said later. What happens to the navel, how it opens out.
(58)

Reading through this collection, one sees more than mere reflections of memory and thought but also, and in the style of feminist poets such as Adrienne Rich, there are reflections on beauty and sadness. The speaker finds her own place in the world around her as a writer, whether witnessing the sadness of others or understanding her own, which, to me at least, seems to reflect the power of poetry as a therapeutic device. These are poems that seem to inspire the necessity to write.

Although many poems are about specific memories and experiences, Langdon keeps us invested through phrasings and aspects that many can identify with. Two poems exemplifying this are “Negation” and “Blues of Summer”. Both are about unwanted attention dramatising uncomfortable feelings experienced by women, the harassment instantly recognisable by Langdon’s choices of words, her skilful lineation and enjambments as in this cameo from “Negation”:

the time I pretended to leave
a train towns early
because of a man
with a wedding band, whose fingers
travelled more than once
to my knees.

This uncomfortable scenario precedes the description of yet another,  becoming surmised and controlled by a more defiant voice:

I like to think
I would be fiercer, now. By sleeper
each town sped
me past.

and later in the same poem, that confident register imbues the language, lingering in the reader’s consciousness:

Surmising these experiences from anger, to recovery and release of tension, makes Langdon’s poetics an activism that is poised, thoughtful and emotionally charged.

The iconic, “Blues Of Summer” begins with one of her finest opening lines: ‘Pretend beauty and hope it shows …’ This beautiful yet angry poem about body image and the male gaze, which are key themes, is one of the very best of this volume. Characteristically, the images are precise and there is deft control of the shifts between public and private address. The poem maps out the constrictive power exercised on the simple act of walking along the beach into a battleground. Langdon evokes the steely power of the gaze, outwardly and inwardly, whether it be casting doubt over one’s own view of oneself or the dangerous call outs of men:

that your ankles don’t collapse.

Hard-won resistance to misogyny couples with disciplined emotional sincerity in poems such as these. Nonetheless, they seem directly lifted out of life and dramatically transformed. This is a poetry of insistence and empowerment, which, to put it simply, deserves to be read.

Glass Life is a fine achievement. This is a book of extreme delicacy and beauty, from its gorgeous cover, by the artist Susanna Majuri,  which reflects the poetry and its aims wonderfully. Langdon’s poems are sweet, tender, angry, exciting, reflective, sad, and ecstatic, all varying on differing ideas, phrases and situations. Its key themes of fragility and strength are what keep these poems consistently powerful, reflecting through experiences and thoughts that are like the vagueness of lost memories yet recovered through the looking glass of poetry and its own fragile power.

WILLIAM FARNSWORTH is a 22-year-old writer who works and lives in Geelong and Melbourne writing poetry, articles, and reviews in various publications. He has worked in theatre and in film for the past 4 years, distinguishing himself in touring plays about Australian history and co-founding Geelong’s first LGBTIQ film festival: GPFF (Geelong Pride Film Festival).