Winding the Land by Ben Walter 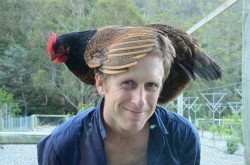 Ben Walter is a Tasmanian writer whose fiction has appeared in Overland, Island, Griffith Review and The Lifted Brow. His debut poetry manuscript, Lurching, was shortlisted in the 2013 Tasmanian Literary Prizes.

I had felt a skin of regret at being compelled by party policy and the tidal whims of my constituency to vote against the private member’s bill tabled by David Beveridge, stemming as it did from the now-infamous arguments attributed to my former son-in-law, Ian Davey. Ian’s motives in marrying Sally had always been cloudy to me, forced as I was to acknowledge her lack of charm or beauty, but until the revelations I’d always felt a margin of gratefulness to him, tempered by concerns for his dynastic ambitions.

While Ian never sought the endorsement of the Tasmanian people, nor made inroads into my own convictions, Beveridge, the youngest member for Denison, so came under his sway as to table the bill that was to founder so spectacularly. I have searched my memories of dinner parties and summer barbecues, and I can’t recall facilitating the introduction; what’s important is that they crossed paths, and Beveridge was in the mood to make a difference.

The essence of Davey’s arguments centred on the economic and social benefits that had flowed from the Tasmanian innovation of daylight saving. Allowing for an extra hour of evening sunlight had minimised electricity usage and widening the evenings, bringing a little of the Mediterranean to our idiosyncratic local summers. Could this revolution, which had gone on to fiddle global clock faces, be applied to space as it had been to time?

How was the land to be moved? So scoffed a Braddon sinecure from my own side. Did Beveridge propose to up the ante on continental drift? Did he imagine the land would up and beg, roll over like a dachshund? Davey was quick to explain through his elected mouthpiece that just as daylight saving had not altered the movement of the Earth around the Sun or the planet’s rotation on its axis –   merely our conventions relating to it – the same could be attempted with respect to our experience of space. Was the entire population of the state to be moved to the east, the west, the south or the north over the first weekend in October, the first weekend in April? Would this lead to seaboard populations sleeping in dinghies and those nestled in the mountain valleys breakfasting on the peaks of the Wellington Range? Yes, Beveridge intoned triumphantly in parliament, that’s exactly what he was proposing – he was delighted that the honourable members had understood.

Ian was insistent, that far from attempting to dry the southern winds or cool sweaty shoulders through the brief, unexpected heat of summer days – this was popular whimsy, incidental to his goals – he was advancing the proposal as a spur to the development and innovation. Imagine, he would say, a whole second layer of infrastructure. Consider the policy revolutions for zoning and land ownership, the redistribution of wealth, energy flexibility, housing design and material efficiencies. Think of the growth of the construction industry, of the community blending and growth in social capital, of the tourism branding. Who wouldn’t want to spend and invest in the new, overwritten Tasmania?

“Just think,” he would insist, “an entirely fresh start, but one that would co-exist with all that belongs to us today. It would be a model for us. An exemplar. If anyone can sway opinion on this, you can. Support David’s bill.”

The relationship we shared rendered any help I could have offered implicitly nepotistic; it certainly wouldn’t have done me any favours in the party room. Beveridge’s own side were unwilling to support the bill; it was obvious to insiders that he had fought and lost a series of unbalanced debates. When it came to the vote the proposal was predictably defeated. Beveridge resigned his membership of the party and was bundled out of parliament at the next election; the people of Tasmania taking its revenge on the wrong sort of independent.

But it was only when the national papers picked up the story that the matter took the turn that it did. Naturally, the analysis was as critical of the policy framework as the local tabloids, but their aptitude for digging led to the scandal that was to bring the family apart, and for which I am willing to share little responsibility. It had nothing to do with Beveridge, who had relocated to Melbourne to work in light consulting; it was my son-in-law who became the object of the nation’s ghoulish fascination.

It wasn’t that he had decided to embody his principles, moving five kilometres to the east at the beginning of every October, pacing out the exact distance and making a nuisance and object lesson of himself. Sleeping on the roof of an unfortunate retiree’s house, developing his status as an idiotic cause célèbre. Features on the more idle current affair shows, updates buried in the inner rings of newspapers. Nor did he radicalise an allied cause, swivelling day and night and altering the clocks by twelve hours. I was expecting something like this, a strident spectacle swiftly forgotten, a depressed, insomniac tendency justified after the fact by adaptations of his theory.

He simply seemed to disappear. Surprise gave way to genuine concern when we also lost contact with Sally; after several weeks with no response to our phone calls, no answer to our knocking at their West Hobart home, I made a call to an acquaintance in the force who uncovered the scandal just as the major newspapers began to pick up the story.

What really caught the national interest was the tattoos, tattoos that voluntarily or otherwise had been inflicted on Sally’s body. The maps overlying graphs, plans engraved against diagrams, casinos in Cremorne and brick flats jutting from the Organ Pipes. And images of Ian and Sally’s own possessions, their wedding gifts, displaced into forests and other people’s homes, crudely drawn and redrawn, carved with needles and ball-point pens, layers and layers repeated. When they finally found her, emblazoned in blue and white like dense china, she was unable to stop quivering at the thought of further redirection and displacement. What had steered Ian’s ideas in this gruesome direction? Why had he decided to map and remap his wife, my daughter?

The images left a wake of speculation and fascinated outrage; even now I am burdened by memories that set me searching of fresh appalled responses, the casting of blame and the passing of moods to the friend across the road, the stranger in Buenos Aires. I stay awake well into the night, the outline of my wife waiting at the study door, mopping myself in the outrage and confusion of others, as Sally sleeps quietly in the spare room. She has finally settled calmly in our home, quite content remaining where she is.