Writing and Complexity at the Borders of Humanity by Janet Galbraith 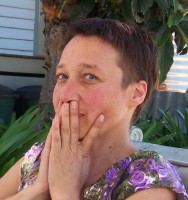 Janet Galbraith is a poet living in Jaara country.  Her work has been published in academic, health and literary journals in Australia.  Her poetry collection remembering was published by Walleah Press in 2013.  Janet is founder and facilitator of Writing Through Fences: a writing group made up of people writing from within Australia’s immigration detention industry.

Writing and Complexity at the Borders of Humanity

Writing Through Fences is a writing group made up of people who are, or have been, directly affected by the Australian immigration industry. The name refers to the ability of writers and artists to reach beyond the fences and walls that attempt to contain, define and silence them.   Each time the writers of Writing Through Fences write they are crafting their own drum.  Through the writings of this diverse group of people – linked in their experiences of immigration detention, displacement, imprisonment, and writing – language, experience, knowledge and identity, beyond reductive understandings of people as ‘detainee’, ‘asylum seeker’ ‘refugee’, are (re)affirmed and created.

’Til when will I be called ‘asylum seeker’, ‘refugee’’, asks one young woman writing from within immigration detention (2).

‘I am not only this’, says a boy incarcerated in Christmas Island.  ‘I am a boy, a brother, a son, a football player, a Hazara, a friend, a student.  I love my mother, I love my family, I love Janet, I love my friends, I love biryani’.(3)

As many readers will know, people incarcerated within immigration detention centres in Australia, on Nauru and Manus Island are referred to by a number given them upon arrival.  This number is referred to as their ID or boat numbers.  This use of numbers to replace names effects a denial of personal and cultural history.  To lose one’s name is, for many people I have spoken with, to lose a sense of self.  It removes the identity of the individual that exists prior to imprisonment in immigration detention.  The primary experience of self then becomes that of prisoner and with that the confusion of being labelled ‘illegal’ and ‘criminal’.

from Surroundings of Sadness

what have i done to deserve this situation?
is seeking asylum a crime?
what i was looking for is peace and freedom
but now it is far from me
it is like the distance between earth and sky.

This use of numbers also add to the fracturing of familial relationsips.  As one young girl of 17 explains in a post in our writing group: ’I am sick of being called [number withheld]. My mother gave me a beautiful name. It is all I have left.  But now even this is gone because I am just a number.’ (4)  In response to this post another young writer sends a poem:

One Strong Woman to Another

Let us look forward.
We will get our chance one day.
And we will be called by our beautiful names.

We didn’t come by illegal way.
We are not illegal.
We cry and cry.

No-one gives us a tissue.
We are refugees.
Flashbacks take us back

Where we cannot go.
Where can we go forward?
They will not let us settle.

Let us be strong.
Let us forget numbers
Let us call out
our beautiful names.

One of the things that I find most powerful about this poem is that rather than being defined by those who would un-name and mis-name her, the writer enacts her own agency as she chooses to provide sustaining care for another young writer, encouraging the remembering and use of their beautiful names.  Against the brutal background of detention, and the belittling notions of the ‘poor refugees’,  these writers claim strength, tenderness and solidarity, asserting possession of their own histories, their own memories, thoughts, emotions, experiences and names.

To claim this is not to forget the harm being inflicted upon the bodies and psyches of people in detention.

from Rivers of Water Run Down

Years and months… weeks and days…
hours … and minutes… seconds are passing
from me … But my pain
has caused my heart to be broken
Rivers of water run down from my eyes
the thick layer of pain covers
my whole body.

The experience of detention industry often produce a profound sense of isolation and dislocation:

All the birds have flown up and gone,
a lonely cloud floats leisurely by.
We never tire of looking at each other
only the mountain and I.

Alongside this, however, is the maintenance of relationship.  As the following writer writes intimately of his love for his wife, the reader is invited in to witness a deep love that has withstood much loss and withstands ongoing suffering in immigration detention.

After rain
there is your smell
on the footpath
of my place.
Still, still
after rain
when everything is gone
and everywhere is clean.
I do not yet know
what can clean your name
from the wall of my heart?
No rain.
Nothing.

When the world slept

I was writing
when the rest of the world slept.

The birds were singing,
the weather was calm.
While the stars were twinkling
I sat outside
and looking at the sky
I suddenly thought:
How beautiful is Allah’s creation.

Whilst each person incarcerated within the detention fences will have stories of violence, trauma, loss and despair, they will also have stories of joy, attention, love, relationship and wonder.  Witnessing this requires that we recognise these writers as complex people rather than abstractions of humanity.

Another writer, who has been incarcerated in immigration detention for more than 5 years overtly demands the reader examine him/herself, our ways of seeing and our expressions and understanding of humanity:

Is it a human being that you see what you look at me?
From the depths of your soul, I ask you to give me an honest answer.

As I read more and more work from people writing from within Australia’s immigration detention industry I become more aware that what is needed is that we  ‘bring our own individuality more honestly to meet another’s.’ (6)

A writer, reflecting on an image published of people incarcerated in Nauru challenges us to look closely, to reach beyond the deadening and de-humanising effects of mass media.

Look at this image closely.
Take 30 seconds of your time and look closer.
Feel the pain in this image.
These people are refugee children, women and men in the camp of Nauru. You don’t have to know any of them. Just looks at their hands, faces and eyes.
The voice of the cries and shouts that burn inside people can be easily felt beyond these fences.
Look at the closed fists of these men and women. They have fled from the prison of politics, tribe discrimination, mono religiousness, religious fanaticism, insight orientation, Basij orientation, hypocrisy, dictatorship, mean fellow and motes, separation, gender discrimination, inflation and government subsidies and have been caught in the wicked sight of men with ties.
Zoom in on the tired faces of these children.  They also love freedom, they have the dream of high educational degrees like other kids.
This picture is not for recording the memory of a family picnic.  It is to show perfection of so called “human rights” in the  farthest place in the world. This is a masterpiece of the history of barbarity and abuse of human values.
This is Nauru – as prison – where all the spiritual and psychological torture tools for children are decorated and systematic.
In this image shameless immorality and terror are clearly shown – metallic fences are the borders between morality and immorality.
Watch carefully. Don’t miss this scene!
—– A.N (written once released)

Each of these writers demands that we ‘look closely’ at the images we are fed of people incarcerated in immigration detention. They invite readers outside of the fences to see beyond and despite the reductive language that circles around them both in relation to supporters of Australia’s immigration detention industry and some of it’s detractors.  We are invited to see the ‘hands, eyes and faces of these people’; to feel the ‘cries and shouts that burn inside people’; to remember their names, to recognise that people have fled their homelands for many different reasons; and that this picture tells us much about our own humanity: ‘In this image shameless immorality and terror are clearly shown’.

Fady Joudah, poet and doctor writes: ’Somehow, poetry can participate in restoring the humanity of others despite the language of the day.’ (7) It is perhaps in this way that the poetry and writing from those involved in Writing Through Fences is a larger gift than those of us outside of the fences have imagined.  It opens a space for a re-writing of the borders of humanity in a climate where, as a writer incarcerated in Manus Island writes: ‘It is the loss of your own humanity we are seeing.’ (8)

-This piece was written by Janet Galbraith in collaboration with the writers of Writing Through Fences.