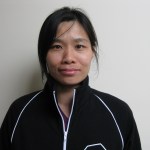 Yim Tan Wong was born in Kowloon, Hong Kong, and spent her formative years in the American mill town of Fall River, Massachusetts.  She studied English and French Literature at Emory University and earned an MFA from Hollins University, where she also received a teaching fellowship and an Academy of American Poets Prize. Her poems have appeared or are forthcoming in The Portland Review, Spillway, Off the Coast, Crab Orchard Review, Crab Creek Review, MARGIE, and Michigan Quarterly Review, among other journals.

Slice a window into six glass squares. Float an egg
inside square one. In two, flaunt a footless shoe
with tassels & a two-inch heel.  Drift a derby hat
beneath the tacit egg, and below the shoe, a candle melts,
flame unflickering, still as water imitating glass,
block five’s clear tenant. Frame six: a sledgehammer

mid-swing. Angled forty-five degrees, the sledgehammer
is labeled le Désert as though smashed shells of eggs
compose the desert’s sand instead of shattered glass.
Glass, aka l’Orage, is a static, crystal storm, what the shoe
once bet the nimbostratus could not do. Definitions melt.
Word & picture alloys vow: “Snow” is but a word for “Hat.”

Have you ever worn storm snows like dusty, floppy hats?
Unleashed a glass anger that could break a thousand hammers?
Or watched a mirror liquefy your face & melt
its cloud-patched skin into the canary scramble of an egg?
Have you felt in you a ghost foot as though you were a shoe?
Or panicked when you did not see yourself in a looking-glass?

Spell “Glass” S-T-O-R-M, though others may insist G-L-A-S-S.
Letters are but coins: They clink & toast inside a tongueless pauper’s hat.
Whether you call La Lune “the moon”, “a camel” or “a gnu”, a shoe—
but not a shoe—is what the high-heeled, tasseled hammer
slings, cooking dim, dim din. Yet, trust René’s elliptic map, equating “Egg”
to tree “Acacia,” burning worn-out routes until it melds melted

canals into nightmare, love, a war, a law, or lie. Clarity forever melts,
twists up the funnel’s train wreck roar & snowflakes made of glass
mosaic the tornado’s spinning trail of wrecks.  An orphaned egg,
free-range, freestyles new names for moons circling planet Hat.
Cosmologists calculate no ceiling to what one can hammer
picture-word relationships into, so, wear this chaos like a shoe

of shell, of fire, glass or sand, this shape-shifting shoe
that glistens like a patent leather moon, ever-melting
cantabile through freelance wind and wax. The master hammers
silicate alphabets out of shredded dictionaries and prescription glass
to read, to really see, past paint, past words of sand, la Neige, the hat,
giraffes who munch acacia leaves where some insist they see an egg.

Rocket through this shuffled world; wear its red-red shoes of glass.
Words are storms & beasts: they melt & mate, trade identities like hats.
Sledge your hammer! Order disorder, the mayhem omelet of a restless egg.

Rene, on your birthday,